Thick-cut bread is fried with an egg nestled inside (aka "egg in the hole"!). Then the sandwich is topped with slices of fried bologna, tomato and cheese. The cheese is then broiled to perfection for a delicious and hearty fried bologna and egg breakfast sandwich!

This recipe uses the "egg-in-the-hole" technique (the egg is cooked inside a hole in the bread). This helps the bologna, tomato and cheese to lay nicely on top so it's easy to cut into the sandwich. When you do, the soft yolk releases and creates the perfect dipping sauce for the sandwich!

Here are the ingredients you need for this fried bologna and egg sandwich:

Wait, pepper but no salt?

No, you don't need any extra salt! The bologna and cheese are already quite salty, so that does enough to flavor the entire sandwich. A touch of fresh black pepper is all you need!

Some quick tips for this recipe:

I hope this recipe will give you a fresh outlook on that humble bologna from childhood! If you’ve tried this Fried Bologna and Egg Sandwich recipe, please let me know what you thought about it in the comments down below, I would love to hear from you! You can also follow me on Facebook, Instagram and Pinterest to see more delicious recipes from Nibble and Dine!

And if you need some other dishes to round out your decadent weekend brunch, check these favorites out! 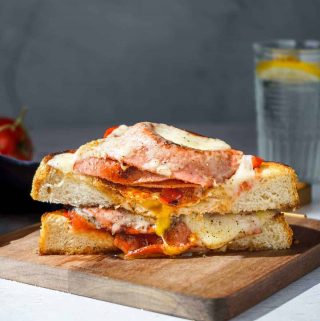 This fried bologna and egg sandwich, topped with sizzled tomatoes and melted cheese is ready in 15 minutes and is the perfect recipe for a lazy weekend brunch.