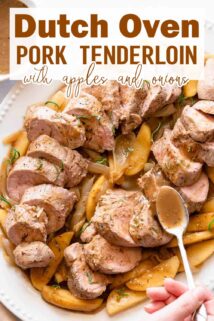 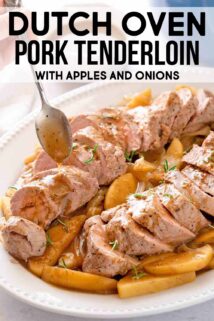 This Dutch oven pork tenderloin is cooked with apples, onions, and an herb-flavored balsamic gravy. This elegant main course would make a marvelous Sunday supper, yet is easy enough to make even on a weeknight! You only need one pot - the Dutch oven - to sear the pork, make the gravy, and finish the dish in the oven.

This easy recipe for Dutch oven pork tenderloin is the best of both worlds! It's comforting, hearty, and really brings that "wow factor" that makes it perfect for Sunday dinner. However, this pork tenderloin recipe can be made with only 9 basic ingredients (not including salt and pepper), and a total time of less than 1 hour.

To make pork tenderloin in a Dutch oven, the seasoned pork tenderloins are first browned in butter, then finished off in the oven with sliced onions and apples. The pork, apples and onions are smothered in a flavorful gravy seasoned with rosemary, thyme, and balsamic vinegar.

Can you cook pork tenderloin in a Dutch oven?

One of the biggest benefits is that you can use the Dutch oven to cook both on the stovetop and in the oven, doing double (or triple!) duty without using extra pots and pans. For example, this Dutch oven pork tenderloin recipe uses the Dutch oven to both brown the meat and simmer the gravy on the stovetop. Then, it's moved directly into the oven to finish cooking. All that with only 1 pot!

Using a Dutch oven to cook meat like pork tenderloins is also useful, because the lid helps retain the moisture and flavor while in the oven, and the thick walls of the Dutch oven help the food cook evenly.

Finally, I also like that a Dutch oven looks beautiful enough to use for serving. So, you can start the cooking on the stovetop, finish it in the oven, then move the Dutch oven right to the table for serving. So many dishes saved!

1. Before starting any of the prep, preheat the oven to 400 degrees F (200 degrees C). Then, peel and slice the apples and onions. Make sure not to cut the apples too thin so they don't fall apart. Aim for ⅓ - ½ inch (about 1 cm) thick slices.

Next, dab off any excess moisture from the pork with paper towels. Then generously season the pork all around with salt and pepper.

3. Now heat 1 tablespoon of the butter in the Dutch oven over medium high heat. Swirl the butter around to coat the bottom of the pot. When the butter is sizzling, add in the trimmed and seasoned pork tenderloins.

Add in the remaining 2 tablespoons of butter to the Dutch oven.

5. To the melted butter, add the sliced onions. Also add in the dried rosemary, thyme, black pepper, and 1 ½ teaspoons kosher salt. Cook the onions, stirring frequently, for 3 - 4 minutes, or until softened.

Then, sprinkle in the flour. Stir and cook for about 1 minute.

6. Next, pour in the beef (or chicken) broth and balsamic vinegar, plus the sliced apples. With a wooden spoon, scrape up any browned bits stuck to the Dutch oven.

Turn the heat up to high to quickly bring the liquid to a boil. Adjust the heat to maintain a simmer. Simmer the gravy for 4 - 5 minutes, stirring occasionally, until thickened.

7. Now we can add the pork tenderloins back into the Dutch oven, along with any liquid that accumulated around the pork. Make sure to nestle the tenderloins down into the pot.

And, if you have one, now you can insert the probe of your oven-safe alarm thermometer into the thickest part of the pork.

8. Place the lid on the Dutch oven, and put the Dutch oven in the preheated oven. Bake until the pork tenderloins reach 145 degrees F (63 degrees C) at the thickest part. This should take approximately 14- 18 minutes. However, the cook time will vary depending on the size of your pork tenderloins, how much they cooked during the searing stage, and your particular oven.

Remove the cooked pork tenderloins to a clean plate or cutting board to rest for 5 minutes before slicing.

What cut of meat should I use?

For this recipe, make sure to purchase "pork tenderloin" rather than "pork loin." These names sound similar, but are actually different cuts.

Pork tenderloin has a long and thin shape, and usually comes in a package with two tenderloins of 1 pound each (which is exactly what we need, since this recipe calls for 2 pounds of pork tenderloin).

How do I prevent the pork tenderloin from getting dry?

The most important factor in keeping the pork tenderloin moist and well...tender, is to not overcook it. Aim for an internal temperature of 145 degrees F. Resting the pork tenderloin for 5 minutes before cutting it will also help the juices to redistribute throughout the meat. That way the juices won't all run out when the meat is cut (resulting in a more juicy bite in your mouth!).

How long should I cook pork tenderloin in a Dutch oven?

The amount of time your pork tenderloin will take to finish cooking in the Dutch oven after searing will depend on the size of the pork, how cooked it got during the searing process, and how hot your oven is. Even the type of Dutch oven could affect the cooking time.

So, I recommend either using an oven-safe alarm thermometer (that beeps when the target temp is reached), or checking the pork every couple minutes after the minimum cook time listed in the recipe to make sure it doesn't overcook.

What should I serve with Dutch oven pork tenderloin?

This pork tenderloin recipe already comes with its own side of apples and onions, so you don't need to add much to make it a complete meal!

Try pairing the pork tenderloin with a starch such as rice, crusty bread, and/or roasted potatoes (my recipe for air fryer fingerling potatoes would work great). Bonus points for drizzling the gravy overtop the potatoes as well! A green salad would also pair nicely, adding a fresh and crunchy element. 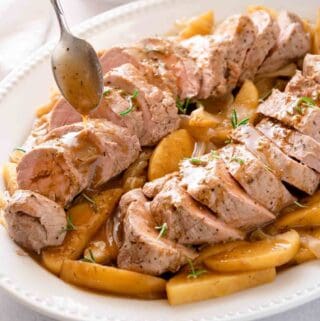 This hearty and comforting recipe for pork tenderloin uses the Dutch oven to not only save on dishes, but to keep the meat moist and flavorful. The pork tenderloin is cooked with apples and onions, in a rich gravy flavored with herbs and balsamic vinegar.

This recipe was developed using Diamond Crystal kosher salt which is quite light and flaky; to substitute Morton kosher or regular table salt, use ¾ teaspoon in the gravy rather than the 1 ½ teaspoon called for. When seasoning the pork tenderloins, salt to taste.

The pork can become dry if overcooked, so I recommend using an oven-safe alarm thermometer if you have one. This type of thermometer has a probe that stays in the meat during cooking, and will beep once the target temperature is reached. Or, be sure to check the meat with a regular instant-read thermometer every few minutes after the minimum cook time to ensure the pork does not overcook.

The nutrition information below was calculated using a total of 2 ½ teaspoons Diamond Crystal kosher salt for the entire recipe. This nutrition information is an estimate only; the nutrition counts of your dish will vary based on the brands and exact amounts of ingredients used. This information was provided by an online nutrition calculator, and should not be considered a substitute for professional medical, health, or nutritional advice. See our full nutrition disclosure policy.