"Crazy Crust" Pie is an easy and quick recipe if you want to make pie but without all the fuss! A simple batter forms a crust as it bakes in the oven; no rolling or chilling of pie dough required! This easy recipe for Crazy Crust Apple Pie includes a homemade brown sugar apple pie filling.

I love a good homemade fruit pie (who doesn't!). But, between making the pie dough, chilling it, rolling it out (and if you're like me, patching up all the torn edges), a lot of the time it feels like just too much effort. So, if you still want all the satisfaction of a homemade pie, you need to try "Crazy Crust" pie!

I hadn't heard anything about crazy crust pie until I started thumbing through my mom's old hand-typed cookbook from the '70s, which had a recipe for it. (I talk some more about my mom's family cookbook in this post for Thumbprint Cookies.) My mom mentioned the recipe in her cookbook originally came from Betty Crocker. Either way, the concept of "crazy crust" has been around for quite a while! But, in my opinion it is totally underrated.

What is "crazy crust pie"?

A simple batter is mixed up and poured into a pie dish. Then, fruit pie filling is added to the center (either store-bought or homemade). As the pie cooks, the batter around the outside puffs up and forms a crust around the fruit. It's kind of a cross between a cake, pie and cobbler, and it is so delicious. And, significantly easier than a pie. Even with homemade filling, the whole thing is ready in about 1 hour!

Because the crust is such a breeze to make, this frees up some more time and energy to make the homemade apple filling, which really makes this simple dessert shine! (Of course, I fully endorse taking a short-cut when you need or want to. If you want to use store-bought pie filling it will still taste amazing.)

Here is everything you need to make my version of Crazy Crust Apple Pie with homemade filling:

Here are a couple quick tips on the crust portion of this recipe:

First of all, unlike a lot of pie recipes that use raw apples, this filling is cooked in a pan before being added to the crust. Cooking the apples first gives better control over the moisture and thickness of the pie filling. (And it gives an excuse to saute the apples in butter, what other reason do you need?)

The most important thing for making the pie filling is to get the consistency right. Here's how to do that:

I hope you like this recipe for Crazy Crust Apple Pie. If you love easy desserts as much as I do, check out my easy recipes for Mocha Oreo No Bake Dessert or Red Velvet Cheesecake Trifle!

If you’ve tried this recipe for Crazy Crust Apple Pie, please let me know what you thought about it in the comments down below, I would love to hear from you! You can also follow me on Facebook, Instagram and Pinterest to see more delicious recipes from Nibble and Dine! 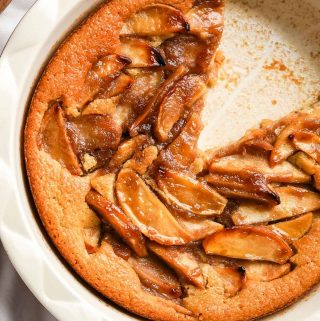 The perfect dessert when you're craving pie but are short on time and energy! Mix up a simple batter and fill the center with homemade apple pie filling. As it bakes, the batter turns into a crust in the oven!

Pre-step: preheat the oven to 400 degrees.

Check the progress of the pie during the last 5 - 10 minutes - if the apples are getting too dark but the crust isn't finished yet, you can tent the apples loosely with a piece of aluminum foil.