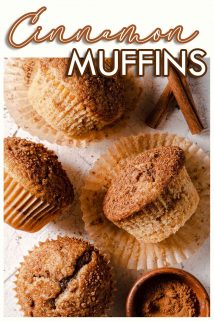 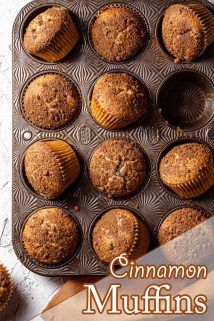 These cinnamon muffins are easy to make, but they pack a strong cinnamon punch! There's cinnamon in the batter, as well as a swirl of cinnamon brown sugar running through the middle of the muffin. And, there's cinnamon sugar baked on top too, of course!

Note: this post was originally published in 2021 and updated in 2022 with improved instructions and photos.

Cinnamon may be considered somewhat of a "common" flavor, but I think it deserves to be celebrated! And in this cinnamon muffin recipe, cinnamon really is at the forefront.

These cinnamon muffins are the perfect thing for a quick breakfast, or as an accompaniment for afternoon tea. Plus, they freeze well so you can keep some on hand when you're craving something sweet!

In addition to the basics (bowl, whisk, measuring cups/spoons), a few additional pieces of equipment will come in handy for this cinnamon muffin recipe:

3. Next, whisk together the dry ingredients in a medium bowl.

4. In a separate large bowl, whisk together the wet ingredients with the brown and granulated sugars.

5. Then, add the dry ingredients into the wet in a few batches, whisking gently in between each addition. Whisk just until the flour is incorporated - don't overmix! There will be a couple lumps still and that's ok.

6. Retrieve the prepared muffin tin. Fill each muffin tin about ⅓ of the way full.

7. Then, sprinkle some of the cinnamon sugar mixture across the surface of each partially-filled muffin.

8. Now just top off the muffins with the rest of the batter.

10. Bake the cinnamon muffins until the tops are firm, and a toothpick inserted into the center comes out with no wet batter. The muffin tops should look a little crackly and nicely browned, like this!

Do my eggs and milk have to be at room temperature?

For some of my baking recipes, like this one for Brown Butter Apple Muffins, I call for the eggs and milk to be at room temperature. While that certainly won't hurt anything here, I did use the eggs and milk straight from the fridge for this cinnamon muffin recipe.

Usually adding cold milk and eggs to anything with butter will cause the batter to curdle, but since oil is used in this recipe instead, I was still able to get a smooth batter that rose well, even with cold milk and eggs.

How do I make sure the cinnamon muffins are moist?

Also, do not overmix the muffin batter. Overmixing the batter can make the muffins tough. Stop mixing once the flour is all moistened, even if there are a few lumps left.

Finally, do not overbake the cinnamon muffins. Overbaking the muffins can also make them dry.

Do I need to use cupcake liners for this recipe?

I prefer to use liners - it takes the stress out of wondering whether you greased the tin enough for the muffins to come out! But, I have been able to remove these cinnamon muffins fairly easily from a well-greased, unlined tin (unlike my recipe for blackberry buttermilk muffins!).

If you don't want to use liners, just grease the tin well with non-stick cooking spray, including the top of the tin. This is to prevent the edges that puff up over the top of the cup from sticking.

For the cinnamon sugar topping:

For the muffin batter: