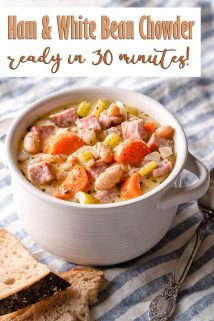 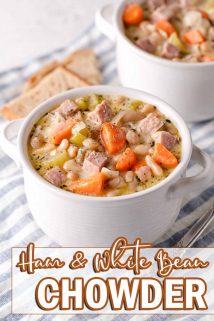 This Ham and White Bean Chowder is the perfect recipe to use up leftover ham. The salty ham enhances the subtle flavor of the white beans, and cream gives a silky smooth finish to the broth. Even better - this recipe only takes thirty minutes to pull together!

Note: this post was originally published in 2019 and updated in 2020 with new photos and improved instructions.

If you are currently sitting on a huge hunk of leftover holiday ham and you're already sick of ham sandwiches, this recipe for ham and white bean chowder will come in handy for you! And, since you may be tired of cooking after the holidays, the even better part is that this recipe is simple to make and takes only about 30 minutes from start to finish!

Love creamy dishes as much as I do? You have to try this recipe for Creamy Cajun Chicken Pasta!

1. Chop the ham into cubes (or squares if your ham is pre-sliced). Cut the carrots, onion and celery.

2. Cook the ham, veggies, dried thyme, salt and pepper in the butter until the onions start to soften and some liquid begins to release.

3. Add the water and beans (undrained!) and simmer until the carrots are soft.

4. Then, add in the half and half or cream. Taste the soup and add more salt and/or pepper if needed.

Keep the beans from sticking to the bottom of the can

Here is a very tiny bean hack for you. Does it annoy you how the bottom layer of beans in a can sometimes get stuck to the bottom? This is especially irksome when you don't need to rinse the beans like in this recipe.

To prevent this, shake the can of beans vigorously before you open it! In this picture, I shook the can on the right for ten seconds before opening. All the beans slid right out!

How do I store and reheat the soup?

You can store the soup in the fridge, in an airtight container, for 3 days. Since the soup has cream (or half and half) in it, you will need to reheat it gently so it doesn't split. I like to do this on the stovetop so you can see everything that's happening. Just heat it in a saucepan over low heat, stirring frequently, and avoid boiling the soup.

Can I freeze this soup?

I don't recommend freezing soup that has cream in it because I think the broth gets kind of grainy and separated when it thaws.

But, if you want to freeze the soup, you could prepare the soup but stop right before adding in the cream and freeze it at that point. Then, when you are ready to serve the soup, thaw it out and heat it gently on the stove, and just add the cream in at the end!

What do I serve with ham and white bean chowder?

This is a pretty hearty and filling soup, especially if you use cream instead of half and half. So, I like to keep it simple and serve with crusty bread and a green salad!

Ham, white beans, and vegetables are sautéed in butter, then simmered in water to form a broth. Cream added at the end provides a silky richness. This is the perfect use for leftover ham, and is ready in 30 minutes or less!

1. Peel the carrots. Chop the carrots, onion, celery and ham into roughly ½ inch pieces. (If your ham is already sliced, just cut it up into bite-sized squares.)

2. Heat the butter in a stock pot on medium high heat. Add in the vegetables and ham, plus the kosher salt (see note 1), pepper, and dried thyme.

3. Sauté, stirring frequently, until the ham and vegetables start to give off some liquid and the onion is translucent, about 5 minutes. (If you have an electric kettle: half way through the cooking time, start heating 2 cups of water in the kettle.)

4. Add 2 cups of water to the pot, either already boiling (see step 3 above), or very hot from the tap. Add the 2 cans of beans, undrained, to the pot.

6. Simmer for 10 minutes or until the carrots are tender. Turn the heat off and add the half & half or cream, stir to combine. Taste the soup and add more salt and/or pepper if needed.