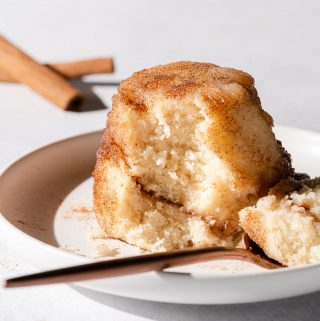 All the cinnamon sugar flavor of your favorite snickerdoodle, in a quick and easy mug cake!

1. In a small bowl, mix together the flour, baking powder, salt, and 2 tablespoons of the granulated sugar. Set aside.

3. Pour the melted butter, along with the milk and vanilla into the bowl of dry ingredients. Mix together with a fork or small whisk just until no lumps remain (do not overmix!).

4. In a separate small bowl, mix together the remaining 1 tablespoon granulated sugar and cinnamon. Sprinkle about 1/3 of the mixture on the bottom and sides of the mug, turning the mug as you sprinkle; the cinnamon sugar will stick to where the butter was swirled inside the mug.

6. Microwave the mug cake on high for 90 seconds. Check the cake; if there is still wet batter on top, microwave again in 10 second increments until the cake is cooked through. Either unmold the cake onto a plate or bowl, or serve right from the mug. Top with an extra sprinkle of cinnamon if desired!

If your baking powder is pebbly, break it apart with your fingers or a fork before adding to the other ingredients. Getting a little piece of baking powder in the finished cake will taste quite bitter!

If the cake won't release from the mug when flipped over, run a butter knife around the edges to loosen the cake.